Contrary to popular startup myths and misunderstanding, tech founders aren’t mainly younger than 30. They are generally well educated, not dropouts. They tend to start up where they are, instead of moving to Silicon Valley or other tech hubs.

Here’s a summary of data published by the Kauffman Foundation:

We observed that, like immigrant tech founders, U.S.-born engineering and technology company founders tend to be well-educated. There are, however, significant differences in the types of degrees these entrepreneurs obtain and the time they take to start a company after they graduate. They also tend to be more mobile and are much older than is commonly believed.

Top-rank universities are over represented

They start closer to home

Where do young companies get money? I ran into this three-minute video over the weekend. It’s a great summary. If you’re not already up to speed on the range of startup options from personal savings to venture capital, just watch this:

(Note: Here is the link to the original on YouTube: https://www.youtube.com/watch?v=U470xXKfDyE)

My thanks to the Kauffman Foundation for providing this, and kudos to narrator Paul Kedrosky, a well-known expert on venture capital.

It does, however, skip over the influence of angel investment, which stands somewhere between friends and family and venture capital. Angel investors generally focus on seed money – early investment for startups at early stages of growth – for amounts less than $1 million. Several experts have different definitions of angel investment, on how many angel investors exist, and how much money they invest. As I write this, the latest available statistics come from 2013. Approximately 300,000 angel investors invested about $25 billion in 71,000 startups, mostly for seed financing and early stages. Venture capital invested about $30 billion that year, but in only 4,000 companies. (For more on that, here’s a link to a draft chapter from my latest book, on Lean Business Planning: Angel Investment.)

I wonder if that’s just to simplify the landscape as Kauffman explains it, or, possibly, because so many people bunch venture capital and angel investment together, as if they were the same thing.

And, changing the subject, I found this interesting number to reinforce what the video is saying. Wells Fargo Bank did a study of startups about 10 years ago and found that the average startup cost in the U.S. is $10,000.

But not just saying it. Being able to believe it. Two of every three plans says it. Only a very few make it actually believable.

And believable, in this context, is still a matter of huge uncertainty. Nothing in startups is fully believable. The closest you get is an interesting market story about solving a real problem and doing something important differently, and a team that seems to have experience and background that indicates it can execute the idea.

The best thing I’ve seen in a while on what investors want — at the high end of venture capital — is this one on The Anatomy of a Successful Entrepreneur, that appeared on TechCrunch about a week ago. Post author Rip Empson digs into the recent Kaufmann data on venture capital, adds some analysis by Fred Wilson, Chris Dixon, and others, and comes out with the short list shown here.

I completely agree with Steve King of Small Business Labs, in Is the Venture Capital Industry Broken? He says:

The news here isn’t that the VC industry is broken. This has been actively discussed for years. The news is who’s saying it’s broken.

Which is, in the flap this month, the Kauffman Foundation.

The Kauffman Foundation has long been a close friend of the VC industry.  In addition to investing many millions of dollars with VCs, Kauffman’s mission of supporting entrepreneurs and high growth companies has resulted in them closely collaborating with the VC industry.

The foundation recently published We Have Met the Enemy and He is Us, a blistering critique of venture capital and its role in startups.

Here’s the problem in one simple business line chart (why I like business charts). It shows how the rate of return on venture capital looked great during the first big Internet boom. It’s not a pretty picture.

On the other hand, those low points in the last few years aren’t uncommon, are they? How is your industry doing since the great recession? The chart shows pretty much what Steve summarizes as follows:

Kauffman has many reasons why the industry is broken.  But the quick summary is the industry simply hasn’t performed well.  Only 38% of the funds Kauffman invested in over the last couple of decades beat public market small cap indexes.  This is primary due to the expensive fees VC firms charge.

So does this mean hard times for startups? I doubt it. I see is a shift towards smaller seed rounds and more angel investment as a web and software technology have reduced the capital needed by the average high-end web startup to get from nowhere to proof of concept and validation. In an oversimplified general sense, what took $2.5 million in 1998 takes probably $250,000 today.

Steve recommends this story in GigaOm and this one by Fred Wilson of AVC for further reflections on the Kauffman findings. 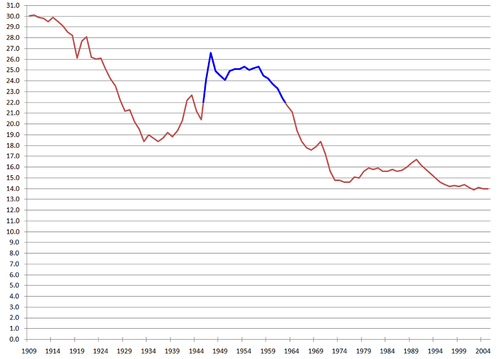 The Kauffman Foundation, based in Kansas City, is a very well endowed, thoughtful, and often very useful source of research and information on entrepreneurship in America. The video here is a compelling three-minute summary of problems and opportunities. The foundation titles it “Looking for the Magic Sauce.”

I love the video illustration methodology, and it makes some important points well. I have to admit, though, that I’m often troubled with the attempt to find formulas and recipes; I suspect that at the core, the process of starting companies is so intrinsically unique to every new business, and every individual, that generalizations don’t apply. Still, this video puts the questions very well.

If for any reason you don’t see the video here, you can click this link to go to the original at the source.

As a small business owner who was once a journalist, when I read Taking Mom And Pop To The Cleaners on the Huffington Post, I think I know how that happens, why it’s bad, and why it’s also unlikely to change.

The story is about how the National Federation of Independent Businesses (NFIB), has become the voice of one side of the political spectrum:

… for the past two years, the NFIB has been less an advocate for small businesses than an arm of the Republican Party. When the interests of the GOP and the needs of small firms have collided, the NFIB has repeatedly sided with Republicans, jeopardizing billions of dollars in credit, tax benefits and other federal subsidies that are critical to the small enterprises that form the backbone of the U.S. economy … the NFIB has maintained a lower national profile, and is still routinely referred to in the media as “the small business lobby.”

No group actually knows what small business thinks or wants because small business doesn’t exist as a group. The thing small business owners have most in common is not having very much in common. By definition, they are nonconformists. They did their own thing when they started that business. My anecdotal sense is that they don’t join groups unless they have to. They’re busy. They’re focused on the business. And they are an extremely diverse group.

Journalists, meanwhile, aren’t supposed to have opinions; they have to ask for opinions. And politicians even more so. Therefore, when they look for what small business thinks, they look for a spokesperson. You or I might be that spokesperson, maybe; but then it’s hard to find just anybody; so they go for somebody. And end up with the somebody they called last time. Somebody who sounds like he or she represents small business. And that ends up as NFIB, and the like (see below: the Huffington story, to its credit, also points to groups representing the opposite point of view, like Main Street Alliance)

Nobody’s really to blame for it. It’s just the way it happens.

What annoys me about it is all the people supposedly talking about it are grinding their own political axes. They define what small business wants as constant whining about taxes and regulations and very little else. What about the bigger picture? What about looking up at what the government can do for the economy in general, like regulating the financial chaos, funding education, sponsoring innovation, and hey, maybe just infrastructure, like fibre cable and freeway bridges? Is it bad to protect employees from predatory employer practices? Not to me? Would we be better off with more open policy towards immigration? I think so.

But the journalists are going to ask the groups that turn up first on their speed dials, cell phones, and google searches. Not you and me.

Does anybody care? Well, they had 3,661 comments on that post by this morning. Hmmm …

And I have to make two late additions to this post: