What a strange moment.  The car, the music, and suddenly, in the midst of unwarranted stress, an unexpected peace. Sort of like the right mellow music at just the right time. When the mood changes all at once. 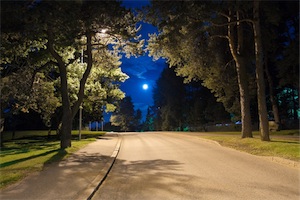 I was driving home from the office at night. I’d been home for dinner, but gone back to the office for a while after dinner. The car drove smoothly over a newly paved street under soft street lights highlighting shade trees in the darkening dusk of late summer or early fall.

Hours earlier, a truck ran over and knocked out our Internet and our television. “Our” in this case means most of the Willamette Valley, from Eugene north about 100 miles to Portland. A fiber optic cable trunk line was cut by a dump truck, or something like that.

What to do? First, the shortness of breath, the shudder at contemplating hours without web or TV. It took effort not to panic. I went to the office, finished up some things pending before leaving for California later this morning.

And then, later, that moment of realization when things came together correctly: the car, the trees, the darkening sky, the music.

Then I realized, with a long peaceful exhale, enjoying the heat of the evening, the people playing on the streets, the truth of the crisis that wasn’t. We have books. We have movies, on DVD and on our iPads. And we even have email on the iPad, and on our phones.We have books and magazines. We have each other. We’d be fine.

We could even talk to each other.

And so we were fine. Comcast was restored before midnight. We were asleep when it came back. Peacefully.

2 thoughts on “No TV, No Internet, The Crisis That Wasn’t”