So, contrarian hat on my head, I want to list some reasons not to develop that online community you and your team have been talking about. I don’t want to be negative … but still …

1. So many communities already.

How many logins can anybody manage? We’re lost in a sea of communities. Each assumes we’re going to log in regularly, check messages, look around, see what’s new, respond to people, and interact. Realistically, though, how many times are you going to do that in a single day?

We’re dealing with several hundred already-established social media communities. There’s Twitter and Facebook and LinkedIn, plus all those others. And then there are those school sites, alumni sites, home town sites, media sites, fan sites, in sites, over sites, and hind sites … never ending. Who can deal with that?

Do you know Ning? One of Marc Andreeson’s brainchildren, it produced hundreds of millions of dollars for its founders, and countless similar-look-and-feel community sites that all did one version or another of community, with log-in, profiles, friending, posting, and so on.

I’ve had notice in recent weeks as one after another of those sites closes shop. Ning is focused on the corporate enterprise market, where there’s money to be billed. And all of those community sites were competing with all of the other ones for your and my limited time available. It wasn’t working.

3. Oh the spam! The never-ending spam!

I’ve been involved with maybe half a dozen serious efforts by major business media and related organizations to build an online community of entrepreneurs, small business owners, and assorted interested parties. I won’t mention names here because I’m involved with most of them, like the people, would like them to work; but they don’t.

The self-serving shallow sales message, some of them thinly disguised, most of them blatant, end up flooding these sites like sewage from a failed treatment plant. Who wants to look at messages when they’re all that? The supposed or alleged interaction, the likes and votes and all, are similarly polluted with commercial sludge. It’s a shame, but it’s also reality.

The business community sites are also flooded with messages that ask authors and experts to summarize, presumably in a couple of paragraphs or so, the thousands of pages already published on that same topic. I know these people mean well, and I like to answer questions. But it would be a lot nicer if they’d look at the site they’re on first, rather than just asking for a three paragraph summary of 50 good pieces already posted.

I get it. They’d like to have it all in a personal message. But it isn’t really that simple. It takes reading all the ins and outs and on the other hands. So that email doesn’t work. And the authors who get it are disappointed, because they thought they’d already answered that question, and put it on the web where people could get it.

5. The molten lava landscape is cooling into solid ground.

I doubt it’s coincidence that two of the three Ning sites I think of first are giving up the Ning model and moving over to Facebook like instead. It’s human ability to support so many different motifs that ends up pushing us all towards a few big ones. With Twitter, Facebook, and LinkedIn, we have consolidated logins, comments, links, suggestions, and updates.

It seems to happen a lot. The winners emerge, the also-rans fade, and the business landscape solidifies.

Please, don’t do that online community you were thinking of.

Do, however, focus on one or more of the already-existing online communities and make it work for you, and your business.

I’m engaged in an email discussion that’s getting heated now and seemed relatively simple when it started. At the heart of the problem is what I call the landrush problem in social media.

I refer to the Oklahoma landrush. You might know the history. There were several movies based on it. On April 22, 1889, thousands of people lined up in a race to claim lands in Oklahoma. Based on the Homestead Act, what they claimed would be their property. 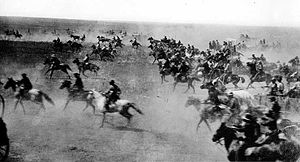 Today I’m seeing that happen in a number of social media sites. But, unlike the land rush in 1889, this one has no limits and no boundaries. Businesses are gaming review systems to get privileged placement. And, with the way that works, the rich get richer and established, and there are not a lot of safeguards.

Here’s how it works: you put up a site that brings some group of people together. Let’s say you want to create a social media site for entrepreneurs. So you create the site — I understand Ning and other vendors make it easier — for people to log in, post on the blog, connect with each other, and so on. It’s sort of a Facebook for your affinity group. And of course you have a system of tagging for likes and dislikes, approval links, and so on. Sounds cool, no?

Cool, yes, but easy to subvert. I’ve seen several sites like this go up, and you may have as well. I don’t want to mention names here because it’s awkward — every one of these sites that I’m aware of is there with good intentions, and none of them have figured out how to deal with the overt sales pollution problem.

Everybody likes the idea of reviews, interaction, thumbs up, and recommendations. But unfortunately, vendors, businesses with sales and marketing intentions, have a lot more incentive to get in and seed the thumbs-ups and kudos and reviews than individuals. So as a result,  the vendors flock to these sites and seed the reviews and end up turning them into sales platforms.

How to deal with this? I don’t know. It’s not like the sites will work if we ask vendors to stay out of them. But several that were among my favorites are now virtually useless to me, because the sales messages from vendors pile up to the point of making it too hard to sift through to the real messages.  And vendor-motivated responses to posts and comments dwarf individual noncommercial responses. Too bad.