What if the “is getting an MBA worth it” question isn’t really a matter of money? What if it depends on who you are, where you are, what resources you have, and what you want? 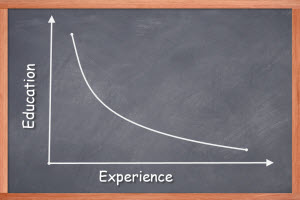 Penelope Trunk posted Why an MBA Is a Waste of Time and Money recently on BNET. She lists seven reasons, all of which are about how much money you won’t make if you stop your career to get an MBA. A couple are sad and true (an MBA doesn’t make you an entrepreneur, and doesn’t increase your earning power unless it’s from a top-10 school), a couple of them obvious, and a couple of them whimsical and interesting (it makes you look desperate and puts off the inevitable).

Penelope Trunk is a good writer and successful entrepreneur. She has a knack for bringing up real issues and she thrives on controversy. As proof of that you can try her own list of rants, or, perhaps even more telling, the titles of this list of her BNET posts. (Anybody who can post something on BNET titled Forget the Job Hunt. Have a Baby Instead obviously understands blogging, irony, and the value of taking a contrarian position.)

Her post makes me ask: how do you determine what’s a waste of time and money? Does education pay for itself in earning power? Is that what it’s about?

How many of the best things in life are a waste of time and money? It’s just amazing when you stop to think about it. Except – whoops – no, don’t, because stopping and thinking would be a waste of time. Instead, get to work. Earn money.

{Illustration credit: my drawing on a chalkboard by Studio Aramita on Shutterstock.com)

4 thoughts on “Is Getting an MBA Wasting Time and Money?”